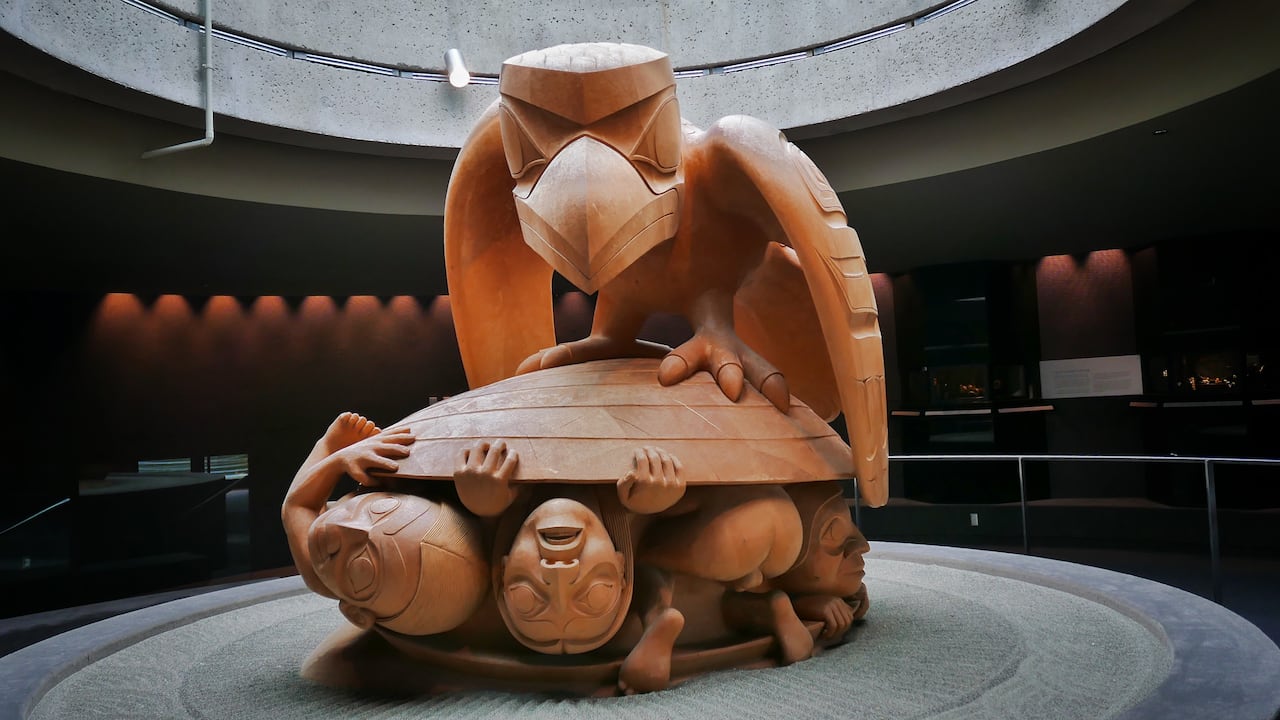 Bill Reid was my first engagement with art. I can still remember seeing his Raven and the First Men sculpture and the sense of awe that I felt. The launch of the new toonie with his design brought me back to those memories.

It’s interesting to think about Reid’s work and my own practice all these years later. What stands out to me now when I look at his work is the quality of his craft and the narrative clarity.

Looking at a Reid sculpture, I have the same “how did a person make that” response that I did all those years ago. His work is beautiful. The composition, the detail and his carving technique are all incredible.

As a kid I remember getting pulled into the story of Raven. In a single still image we understand the story that Reid is trying to communicate.

As an artist I strive for these same artistic qualities. I want my art to be beautiful and I want it to communicate clearly. 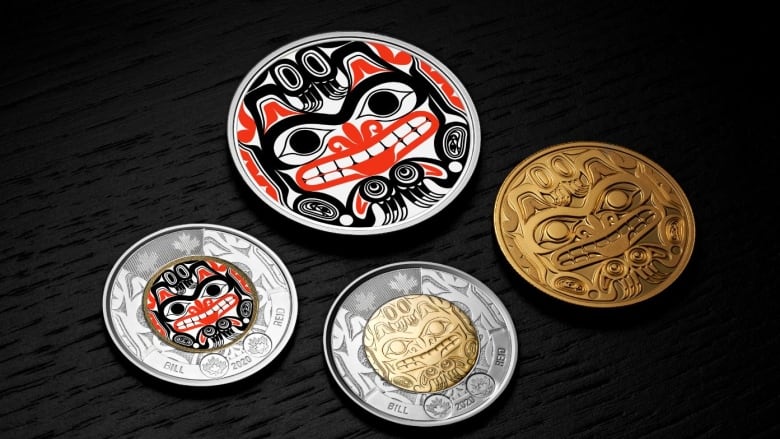 Reid might not seem like an obvious influence on my work. We are working in different cultural traditions. For me what connects our work is craft. Reid apparently rejected the title of artist and called himself a ‘maker of things’. I get that. Like him it’s this process of making that drives and defines my practice.

My knowledge of craft acts as an entry point for me to engage with different fine art traditions. When I look at something like sculpture (which I don’t do myself). I look for clues to how the artist made the object. When I start to understand their process the intention of the artist starts to reveal itself organically. There is always a connection between how something is made and what it is trying to communicate. 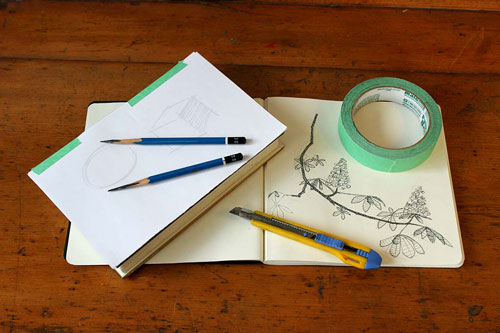 In my first #RokebyDistanceDrawing lesson I invite students to start a sketchbook and develop a practice of engaged observation. Don’t worry this doesn’t require any deep breathing. 😉

Most young artists assume that because they know the world around them they also understand it. When asked to put pen to paper and draw something as simple as a tree most flounder and draw a 🌲 not an actual tree. Many assume that this means they don’t have any artistic talent. With first lesson my aim is to throw out this idea of talent and get students to start thinking about the connection between observation and drawing.

Learning to draw is about training your eye. It means sitting in front of your subject for a sustained period and working out it’s structure and mechanics. Of course the ultimate aim of art is expression but this research into observation will allow a young artist to better articulate and inform their ideas. 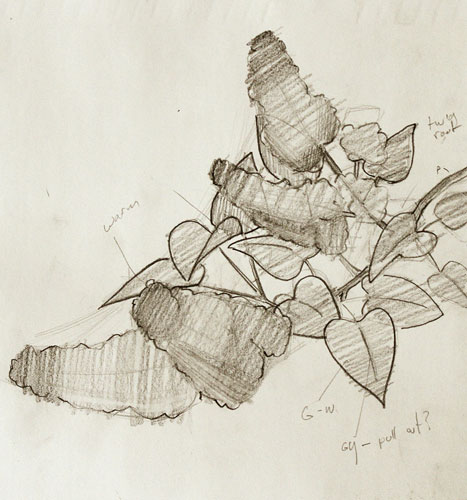 For the lion’s share of this course we will focus on training our ability to see. Near the end of the course we will shift our attention to creative expression. I can’t wait for you to see how all of this time spent looking will fuel your creativity!

Lessons are free and materials are kept simple (paper and pencil). Each lesson comes with step by step instructions! The course is hosted on the Rokeby Museum website!

Click here to join the read the first lesson!

I’m so thrilled to announce the launch of a new project, The Rokeby Distance Drawing Course! At once a digital exposition and an interactive piece, the project plays with rather than fights against the limitations of interactive artistic creation in the age of COVID-19.

As Artist and Residence at the Rokeby Museum, I am developing a new series of work that explores, activates, and shares the letters from a 19th century drawing course and the artistic journey of its student – a young woman who went on to become a pioneering female illustrator. The work is a meditation on knowledge and sharing as driving forces for connectivity and overcoming isolation.

In September, 2019, I was invited to the Rokeby Museum to engage with their archive as part of a four day artist lab. From 1793 to 1961, Rokeby was home to four generations of the Robinson Family.

In the museum’s archive of the family’s letters and artifacts I discovered the original letters (dated 1891-93) from a correspondence drawing course that one of the daughters, Rachael Robsinson Elmer, took as an adolescent.

In March and April of 2020, I ran a series of instructional drawing demos from my Instagram Live as a way to test and think through different ways of using technology to present this historic material to a contemporary audience.

As part of the research phase, the Rokeby Museum is supporting my work through digital access residency that is taking place over the summer.

Following COVID-19 guidelines, the residence takes place remotely. Collaborating with their Education Fellow, Allison Gregory (who lives on the property) I have access to the archives (art and letters of my main subject, Elmer). Gregory and I have a weekly meeting to ensure my access to the archive. In a lot of ways our collaboration mimics the form of the historic correspondence course that inspired the project.

Catherine Brooks, the Rokeby Director, and I agreed that making this drawing course available now, during the COVID-19 crisis, will serve a real community need. We intend to share this archival drawing course freely on the museum’s website.

The course is meant for self directed learning. Students can join at any time and they can work through the exercises at their own speed. Starting July 27th until October 5th we will publish a new lesson every other week. For students looking for a little extra incentive we encourage them to treat it like a 12 week drawing challenge!

Each lesson includes a little history on the life of Rachael Robinson Elmer. We hope students will take inspiration from her artistic journey. To help students work through the exercise there are step by step drawing examples and a written explanation.

To participate you will need a basic drawing kit.

The course is open to anyone curious about learning to draw but is ideal for kids 15 to 17 interested in getting into an animation, illustration or game art program. I have experience working as an admissions advisor for a video game art program and have designed the exercises in a way that these drawings could be used for an art school portfolio.

To ask questions or get feedback share your work on instagram and tag @clinton.courtney and @rokebymuseum and use the hashtags #RokebyDistanceDrawing and #DrawingWithRachael.

You can also email questions and images to intern [at] rokeby [dot] org. We want to see your work!

I graciously acknowledge the support of the Canada Council for the Arts for making this project possible. 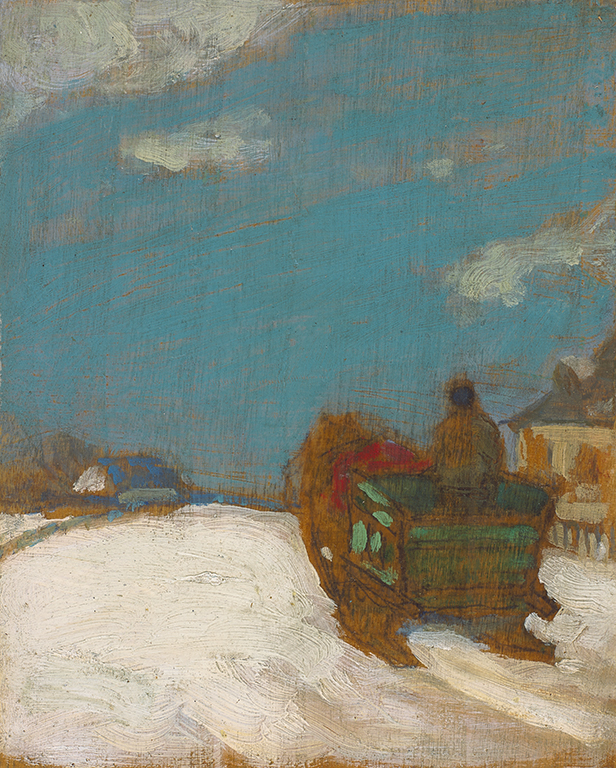 The traveling exhibition, Morrice – The A.K. Prakash Collection in Trust to the Nation, is the story of an artist, a collector, and two kinds of Canadian identity. It offers a contemporary reading of the work of Canadian painter James Wilson Morrice through the eyes of the prominent Canadian art dealer Ash K. Prakash.

The exhibition is curated by Katerina Atanassova, Senior Curator, Canadian Art, at the National Gallery of Canada. An important curatorial choice was to include a video interview of Prakash talking about his collection and his interpretation of the artist’s paintings. Including this video shifts the exhibition from an artist retrospective to a conversation between artist and collector around national and personal identity.

Morrice born in 1865 was the son of a Montreal merchant. Originally he studied law but after graduation abandoned the practice to pursue a painting career. To do so he moved to Paris to further his studies with French masters of the day. Unlike most Canadians who studied abroad, Morrice did not return to Canada after his studies, but only made short visits to the continent at Christmas throughout his adult life.

Morrice did stay connected to his native land on a professional level. Over the years he exhibited in Canada and was part of several artist associations including the Ontario Society of Artists, the Art Association of Montreal and the Royal Canadian Academy.

He also fostered many relationships with Canadian painters in Europe including Maurice Cullen and William Bryamer. Because his work was often shown in Canada, it was an important influence on the modernist style of the Group of Seven and especially to the work of the artist A.Y. Jackson.

“It was through (Maurice) Cullen and Morrice that we in Montreal first became aware of the fresh and invigorating movements going on in the art circles of France,” A.Y. Jackson wrote in 1966. (Larsen, Montreal Gazette)

As if mirroring the experience of Morrice, Prakash was born in Ambala, India, and immigrated to Canada in 1968 after completing his studies at the University of Michigan.

For two decades he worked in the Canadian government most notably for the Privy Council Office and the Prime Minister’s Office. In 1979 he discovered a passion for art while working for UNESCO in Paris. In the early 1990’s, he left the civil service to devote himself to collecting and art scholarship. Now considered one of Canada’s most important art dealers, he has also contributed to Canadian art through his scholarship and the publication of several books on Canadian art.

Morrice is considered a Post-Impressionist painter. Like the Group of Seven he is best known for his small oil sketches (or Pochades). His refusal to abandon the figure or his urban setting place Morrice apart from his impressionist contemporaries. On an aesthetic level, Prakash argues that it is the sense of mood in his work that makes him one of the great early modernists.

His work is less interested in descriptive reality and is instead “a search to transform painting from a vehicle of seeing to an aid to feeling.” (National Gallery of Canada) Prakash explains that where the impressionists were directed by light, Morrice employs light to direct the emotional response of his viewer.

“For Morrice a landscape was a composed expression of a mood, of un état d’âme as he wrote in one of his sketchbooks.” (Hill, Morrice at Montreal)

Morrice’s work expresses the melancholy of an outsider. The existentialism of Camus’ L‘Étranger comes to mind. Constantly traveling he paints the streets and cafes of Europe and Northern Africa. Subjects are seen from a distance and disconnected from the viewer. They are engaged in their own private world and seem unaware of the artist’s gaze. The audience is placed in the position of voyeur or tourist: observing scene without knowing how to engage.

Prakash describes Morrice as “at home nowhere and out of place everywhere” and adds “I relate to that.”

Art that Expresses the Eternal

In 1985, the time of his last major retrospective, Morrice was read as a Canadian living abroad. But relating Morrice’s émigré identity to his own experience, Prakash uses Morrice as a bridge between the cultural identity of natural born and naturalized Canadians.

“Morrice has the unique ability to acknowledge his experience of life and, through his paintings, to distill a moment into that which is eternal and does not change”. (National Gallery)

This inclusive look at identity is relevant and important in our age where national identity is evolving and its rhetoric is too often used to divide us.  Morrice’s search for the eternal speaks to our shared human experience – one that transcends time, place and creed.

Prakash calls his donation a gift to the nation.  The exhibition is accompanied by a beautiful catalogue free to visitors. At the National Gallery until March 18th the show will travel to the Beaverbrook Art Gallery, the Art Gallery of Alberta and the Musee d’art de Joliette.

“Morrice : The A.K. Prakash Collection in Trust to the Nation Catalogue.” National Gallery of Canada. https://www.gallery.ca/for-professionals/museums/travelling-exhibitions/james-w-morrice