CBC Arts is doing a great series called Art 101! The series tries to breakdown some basic ideas about art! In their most recent article by Lise Hosein, Why is this Art?, they explain the value of Abstract Expressionism (AbEx).

In the spirit of debate I do want to push back on some of the ideas Hosein presents. Her argument centres on an idea that AbEx is the pictorial embodiment of freedom of expression. I would argue that we should push back against this ideological reading of the movement and instead look to the canvas to understand the value of the work.

Art and the Cold War

She rightly points out that the movement developed during the cold war at the same time as the Socialist Realist movement in Russia. The Russian movement was heavily monitored by the state and artists had little freedom over what they could paint.

What the article does not address is that AbEx was also a state sponsored movement. The American government sponsored exhibitions and the production of abstract art. What’s nefarious about the actions of the American government is that they didn’t tell anyone (including the artists). So there is this false belief that the abstract movement developed organically.

Just like in world politics I get really worried when we talk about something as complicated as art in black and white terms : AbEx good, Realism bad. 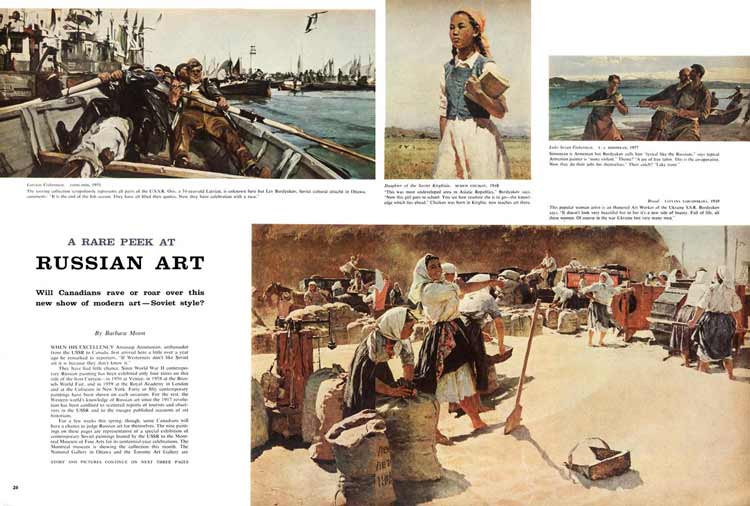 There was actually an exhibition of Socialist Realism here in Montreal in 1960. Maclean’s magazine has the original article up on their online archive. If you actually look at the art it’s fascinating. Despite all of the constraints these artists managed to make something beautiful and meaningful (examining ideas around community and work).

Celebrating abstract art as the art of Freedom of Expression is also problematic because it ignores that AbEx has alway been fairly aggressive in its attack on realism. You have to choose – ‘you are either with us or against us’. Case in point, Canadian critics and curators (all proponents of abstraction) refused to engage with the the Russian work when it visited Montreal.

With US-Chinese trade tensions we are entering into a new cold war. Recognizing that our rejection of realism is linked to cold war politics is important because it reminds us of what we stand to loose if we don’t listening to outside views!

AbEx and the Painting of Jack Bush

What I love about AbEx is that if you separate it from it’s ideology the work holds up.

To understand Abstract art I want to discuss the work of the Toronto painter Jack Bush. He’s arguably Canada’s most important AbEx painter.

The first thing I would say is like any artist you really need to look at their body of work to understand the works value. If you just look at one of Bush’s colour fields it’s reasonable to write off as simple. But if you start to look at a period of an artist work (I’ve chosen his work from the 1960s), you start to understand the artists language and artistic ideas.

In this period, I see the artist using colour shapes and pattern to create a sense of movement or interruption.

In this first image the dominant shape is a flat yellow rectangle. To the right, this wash of yellow is interrupted by a rainbow pattern of colour. The artist is contrasting both colour and pattern to create a sense of vibration between the two parts.

In image two we have a a strip of raw canvas running across the dark patterned background. Not quite making it across the canvas the strip feels like it is in motion racing across the canvas. Using a completely abstract language the artist has created a sense of movement (this series was called ‘thrust’).

In this final example a blue vertical line is invading the horizontal rainbow pattern. We have a similar feeling of contrast (like we did in image one) but this time he is using line direction to create that tension.

Jack Bush was also a prominent illustrator with a good understanding of traditional technique. I can’t help but read his work as a kind of narrative abstraction. His work avoids all references to reality (space, light, form) yet his use of colour and shape still manages to tell a story!