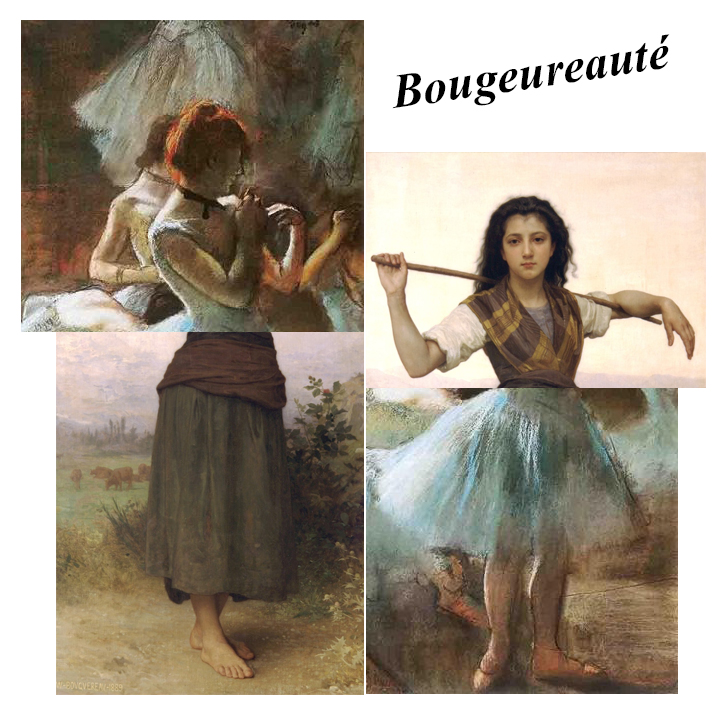 A look at a painterly approach : Edgar Degas & William-Adolphe Bouguereau

In his own time, Bouguereau was considered to be one of the greatest painters in the world by the academic art community, and simultaneously he was reviled by the avant-garde. To many, he epitomized taste and refinement, and a respect for tradition. To others, he was a competent technician stuck in the past. Degas and his associates used the term “Bouguereauté” in a derogatory manner to describe any artistic style reliant on “slick and artificial surfaces”. (source wikipedia)

This rivalry between Edgar Degas and William-Adolphe Bougeureau encapsulates the spectrum of a painterly approaches available to an artist.

Drawing the structure of art

Drawing can be understood like the grammar of visual art. Innate to drawing are a set of rules that help the artist define space in a picture.

What’s important to note is that structurally both of these artists are following the same rules. If we look at sketches done by both artists we can see the similarity in their drawing process. Both are respecting perspective, proportions and the science of light.

Where artists like Degas and Bouguereau differ is in the final resolve of the painting.

It can be said that the resolve of a picture is determined by the degree to which form is rendered.

Bougeureau meticulously renders his work. This means the artist gives a full description of shape as it transitions from the shadow area to the light.

Conversely, Degas work is marked by his economy of brush strokes. He employs a pictorial language that indicates rather than demonstrates the roundness of his figures.

Truth has always been at the heart of artistic endeavor and throughout history artists have shifted between a definition that centers around the notions of the real and the ideal.

In the above painting, Bouguereau depicts an idealized peasant girl.  The artist constructs a definition of pastoral life by bringing together a series of visual elements (her look, cloths, setting). The image is artificial in that his subject is not a real person. But his intention is not to present us with a real shepherdess, he is instead presenting the viewer with the idea of a shepherdess.

Degas’ ballerinas are captured in dynamic poses that express their immediate reality. There is very little detail to describe their appearance yet the authentic nature of their action represents another kind of truth based on a lived experience. This sensation of voyeurism is amplified by Degas’s economy of strokes. Working in an abbreviated manner allows artists to work quickly and from life. By leaving the painting in this state the artist signals his proximity to his subject.

Beyond “style” we can understand both artists’ process in conceptual terms. Each artist’s’ approach to rendering their pictures reveals much about the notion of truth.

4 thoughts on “What is Bourgeurauté?”