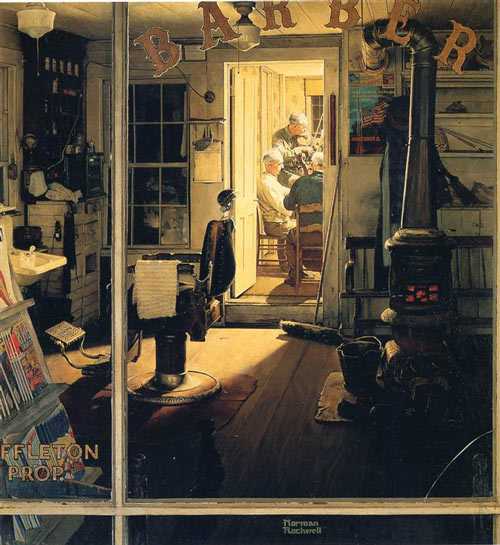 Since July, the small community of Berkshire has been rocked by the proposed sale of Norman Rockwell’s Shuffleton’s Barbershop.

Stating financial woes, the Berkshire Museum was set to auction the work (along with 40 others) at Sotheby’s American Arts Sale on November 13th, 2017. At the last minute a decision by the court set an injunction delaying the sale long enough to avoid this year’s Sotheby’s sale (the works future is still in question).

Citing a 1943 case, Wellesley College v. Attorney General, the Attorney General argued that the “assets of charitable corporations, of which the museum is one, are subject to the purposes for which those assets were given.”

The painting was originally gifted to the Museum by the artist. The family of Rockwell produced a letter exchange between Rockwell and the museum that affirms Rockwell’s intention that his donation remain a part of the museum’s permanent collection.

Why Rockwell chose this Museum

This story reveals the unique relationship between the subject of the work and the space it inhabits. Hailed as Rockwell’s chef d’oeuvre (valued at $20 to $30 million USD), one might ask themselves what such a work was ever doing in a small regional museum?

He produced the painting in 1950 as cover art for the Saturday Evening Post. Living in the region at the time, he based the work on an actual barbershop located in the New England region and (as was his practice) used local community members as models for the musicians in the scene.

The barbershop and models in the painting were in Arlington, Vermont, where Rockwell lived before relocating to Stockbridge, Massachusetts.

By giving this work to the people and place where it was created, the painting makes a deliberate referral to it’s local context reinforcing the conceptual idea behind the painting.

The piece, depicting three men playing classical instruments in the back of a barbershop, asserts the place of “high art” in middle America. In choosing the Berkshire and not a more “prestigious” museum, Rockwell brings his idea of enlightened regional culture full circle.

Rockwell and the Avant-Garde

Rockwell is often criticised as sentimental or overly optimistic in his depiction of American life. The godfather of Abstract Expressionism, Clement Greenberg, disparages the artist as being the worst of the Kitsch.

But social activist Dorothy Canfield Fisher writes an important defence of his work for the preface of the book Norman Rockwell Illustrator:

No one can deny that in many tenement houses the poor are ground down by poverty, disease or racial injustice… Our hearts have been frozen by many a powerful book- presentation of this literal but partial truth. Norman Rockwell reminds us that in those same tenement houses are also many homes in which the safe return of a soldier son sets off an explosion of a joy magnificent in its power and purity.

Tucked in a corner in the modern section of the Metropolitan Museum a small Rockwell hangs near Picasso and his gang of avant gardists. Like Fisher suggests, Rockwell’s work reminds us of the complex nature of truth and its correlation to one’s frame of reference.

Like the characters of Shuffleton’s Barbershop, Rockwell is no bumpkin. He visited Paris to study in his early years and was familiar with the avant garde, making several experimentations with modern technique. Ultimately he chose to paint in a traditional style, and despite great wealth and fame, he chose to live his life in the country – away from any art mecca. 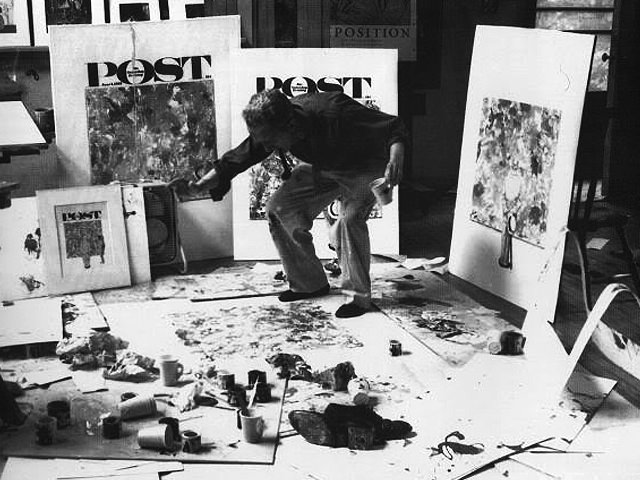 His perspective of the American life is informed by the position from which he chose to view the world. Rockwell’s work is not a complete truth, but importantly, it represents a side of the story that is often overlooked.

He is the ultimate punk. Eat your heart out Greenberg.

Please note the article was updated to correct an inaccuracy. The article original stated the painting was created in Berkshire. The work was actually painted in Arlington, VT.